Our office is located in the very near of the Mariahilfer Straße at Zollergasse 2/18, 1070 Vienna, Austria.

For inquiries please contact us via Email to office@abloom.at. If you want to reach each one of us individually, feel free to download our vcards.

abloom is registered as 282764 f on the commercial court of Vienna • VAT ID: ATU 62933801 • Professional Association: Advertisement • All trademarks and names used on this website are the property of their respective owners.

Most recently we launched Bummerl — zuadraht is!, an online gaming site for Schnapsen players. As Schnapsen is one of Austria's most traditional card playing games, it was quite a task to capture the true spirit of the game and it's players and incorporate it into the design and game-play experience of Bummerl.

Since it's inception in December 2009, we're at almost 700 users now with a total count of over 50.000 played games. This seems like a quite good growing-rate considering that we launched the game to the open public at the beginning of February 2010. Feel free to sign-up and start playing if you're familiar with the game — it's free! Play a couple of rounds, get to know new friends and make sure to let us know what you think of it.

Without further ado, here some screenshots and a snapshot of our office while we worked on the design for the game.

A screenshot of the community site. This is were players meet and where the usual chit-chat happens: 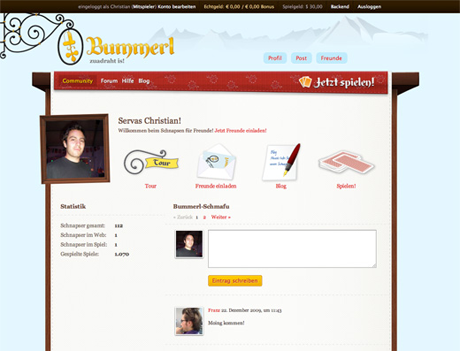 A screenshot of the Flash game-client. Lots of care has been taken to create a truly authentic Schnapsen gaming experience: 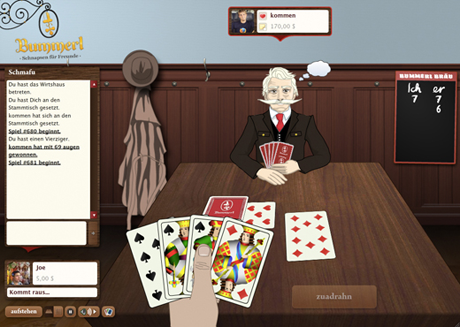 And finally, here's a photo of our office during the design-phase of the game. We usually plaster our walls with huge print-outs of design-elements, sketches or just inspiration: 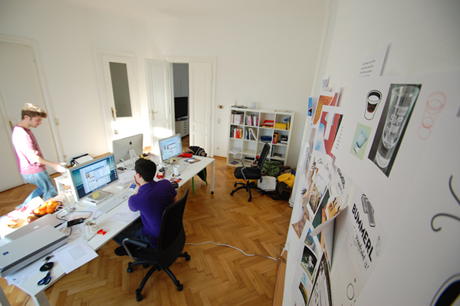 For the curious of you, here's a tour of what Bummerl offers you and the official Bummerl blog.